Tenali Raman Stories – A Tail Of a Dog 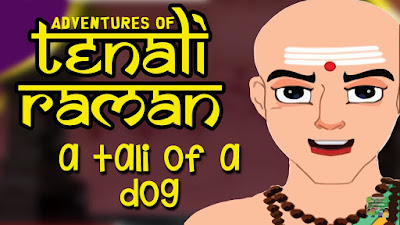 
Once, when the king Krishna Deva Raya and Tenali Raman were walking around the garden and were talking on different subjects. They talked about ‘nature’ too. The king said, “We always have to live depending on nature only. We cannot alter nature according to our life style.”

Tenali disagreed with him and asked, “Why not, my dear king?”

“Is it possible for you to change the natural phenomena?” asked the king.

“Yes, I can my dear king. If I am offered the required time I can successfully execute and prove it.” The king was astonished to hear Tenali’s reply.

“What? What do you say? Are you playing with me?” asked the king irritatingly a little bit.

“My dear king, I hope that we can win over anything if we practise it well and properly.”

“Tenali, you may be firm in your hope. But going against nature is foolish. Understand it clearly.”

Oh! King! If we prolong our talking, how can I prove it? Let me have a chance. Then you will realise that my hopes are true.” The king too decided to give him a chance to prove his hope.

So he said, “Tenali, straighten the dog’s tail. This is the test. It is given not only to you alone but to many others too. Let us see who wins and proves it.”

“Oh! What a great idea! I shall soon prove you by straightening the dog’s tail,” said Tenali. “Okay, let’s start the work tomorrow in the court. Now, we shall part,” said the king. Then both took leave of each other.

Next morning, the court assembled. The king, ministers, courtiers and others were all assembled there. The king asked the minister. “Have you brought here 10 dogs as I told you yesterday?”

“Yes, my king, I have brought ten dogs here. All of them have their tail bent.”

“Your Majesty, shall the courtiers be let to know why you have ordered to bring these ten dogs?”

“I will tell you now. When I was conversing with someone yesterday about nature, I asked him whether nature can be altered. He challenged me that he can. What do you all say about it? Is it possible for human to alter nature?” the king disclosed the purpose.
Everyone in the court replied, “It is impossible.”

“You all voiced together that it is impossible. But one of you in the court has challenged with me that he can alter the nature. What shall we do now?” asked the king.

The minister eagerly asked, “ who challenged with you, my king?”

“He is no one but Tenali Raman who challenged with me,” said the king.

The courtiers were really astonished. Tenali Raman got up and looking at everyone proudly said, “My humble salute to the king. Please, let me prove my challenge.”

“I too asked the same, but Tenali told that he could and so, I have put him in this test,” said the king.

Then 10 people were selected and everyone was given a dog and stipend. Tenali Raman was one among them. Those who took the dogs put forth their efforts as far as they could. They decided to undertake every effort one by one.

One of them tied the tail with a bamboo stick. Another one tied a stone-tied-thread with the dog’s tail. The other one rubbed the tail by applying oil. Likewise, everyone tried in their possible ways.

But Tenali Raman tried to straighten the tail in a different way. He decided, “If the dog is fed well, it will become fat and healthy. The tail too will get rolled strongly. On the other hand, if the dog is reared with a little quantity of food, it will loose strength and become lean, in hunger. The tail will lose the strength to get rolled and it will grow straight.”
So he minimised the quantiy of food to the dog every day. In days, the dog lost its strength, and was not even able to bark.

One month passed. The king ordered to bring the dog to the court. All those who were given the dogs assembled in the court with the dogs. Then king Krishna Deva Raya inspected the dogs one by one and found that the tails of dogs didn’t get straightened. The tails remained so, as they were before. But those who reared them, narrated the troubles they faced and efforts they put forth. Still they could not straighten the tails.

But, Tenali Raman who stood lastly did not spell out even a word. The king asked, “Where is your dog?”

Tenali Raman had covered his dog with silk cloth. Removing the silk cloth Raman said, “Here it is, my king.”

The king saw the lean and weak dog, shivering in fear. As it had lost its strength, it could not lift its tail. The tail was long and straight.

“Look at my dog, my dear king. Its tail is not rolled. It has straightened. I gave just enough food for the dog to be alive, so it became weak and the tail has become straight. But once we start to feed the dog well it will become strong enough and the tail will start to roll back,” said Tenali Raman.

Stories are great eye openers to children, it improves there cognitive, reading and listening skills to a great extent. Reading stories makes the children creative, imaginative and improves their vocabulary skills drastically. I started to read stories to my children when they turned one and half year old. This in turn, has cultivated a very good habit of reading lots of story books. Reading is always fun, so here is my attempt to make coolstories4kids a one stop space for all kinds of stories like fables & fairy tales, folk stories, mythological stories, jataka stories, Tenali stories , moral stories, animal stories, classic stories etc. This story blog coolstories4kids is for all the story lovers out there and I believe you and your kids will surely enjoy the same.